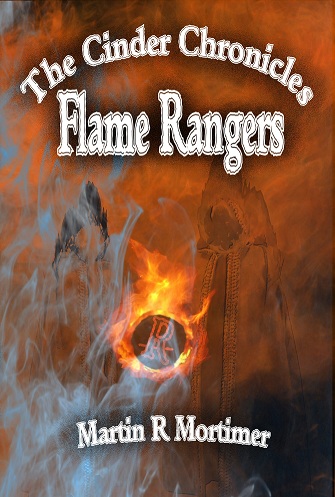 Flame Rangers is the first book in The Cinder Chronicles.

Treghan watches as his brother amazes the people of Judd Village with his flaming prowess, and his family hopes to see Fletcher admitted to the academy. Meanwhile Treghan is barely able to spark with his white flames. He is weak, he is a burden. He is to blame when Fletcher is rejected. In a rash moment, Treghan decides to run, leaving his abusive family forever.

Corilai has a dark power. Her black flames are awakening, and they are terrifying. She can not control them, and as she sleeps, they burn fierce and menacing. Chased from her only home by an angry mob, she finds herself alone and lost in an unforgiving world. Then she meets Treghan, and both their lives are changed forever.

Falling into the midst of an armed rebellion, they must fight to find their destiny, and ultimately work together with their friends to end the uprising before it is too late. Both for themselves, and for the nation of Cinder.

Buy Kindle Ebook (on Amazon US)

We hope you enjoy The Cinder Chronicles