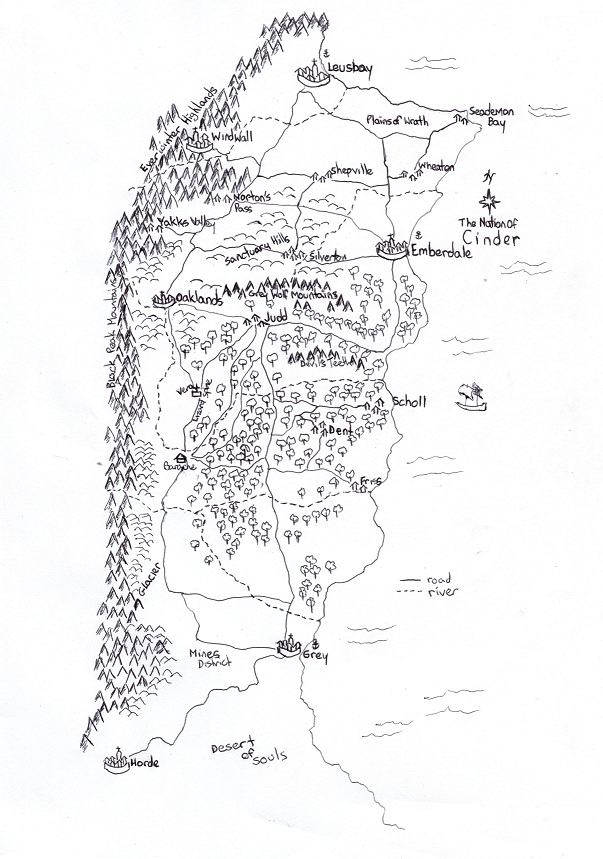 The Village Of Judd
Judd village is where Treghan and Fletcher grew up, and their parents still live. It was also the site of a major battle against Yuri's men.

The Village Of Dent
Dent is the village Corilai grew up in. Her parents returned there after the downfall of Yuri.

The Village Of Scholl
Scholl is a village Corilai passed through after leaving her home, and is Loka's home village.

The Port City Of Grey
Grey, otherwise known as The Steel City, is a large city on the southern coast of Cinder. It is a place where metal works and other mineral industries are prevalent. Grey was the seat of Yuri's power, and later governed by Barache.

Barache's Cottage Hermitage
Barache built himself a hermitage in the woods, in which he lived when he met Treghan and Corilai. Later, when Barache was in Grey, his hermitage became a village for those who could not return home after being conscripted into Yuri's forces.

The Ancient Temple Of Vera
The Temple of Vera is an ancient ruin, and little is known about its origins. Corilai and Treghan sheltered here while running form Yuri's men. Later, Cara led an expedition to investigate and rebuild Vera as a new outpost of the rangers.

The Port City Of Emberdale
Emberdale is the capital of Cinder and home of the Ranger Academy. It is where the Chancellor lives, and he rules Cinder from here. This is where our heroes live, work and study when not on adventures throughout the land of Cinder.

The Walled Town Oaklands
Oaklands is a large walled town in the foothills of the mountains to the west of Cinder. This is where Symin grew up, and his family still lives and runs a bakery.

The Town Of Silverton
Silverton is a peaceful town to the west of Emberdale. It is popular with the Rangers, and the people of Silverton are staunchly supportive of the academy.

The Mountain City Windwall
Windwall is a walled city high in the mountains. Its population doubles in the winter when people who live and work in the Everwinter Highlands retreat to the safety of the city while the blizzards batter the mountains.

The Northern Port of Leusbay
The City of Leusbay lies on the northernmost coast of Cinder. Symin and Loka visited here and found the city unwelcoming due to the lack of any ranger presence for many years. In time, this may change.

The Desert City Of Horde
Horde is sometimes called the city of sand. Its people stubbornly extract an existence out of the Desert Of Souls. Horde has enormous wealth from gems and precious metals. Horde is home to the mysterious Order of the Essence.

The ancient ruined city Tyra
Capital of the once mighty nation of Thres, which was destroyed.

NOTE Some spoilers may exist on this map. This map is a work in progress. Please enjoy learning about Cinder, and come back later to see more!